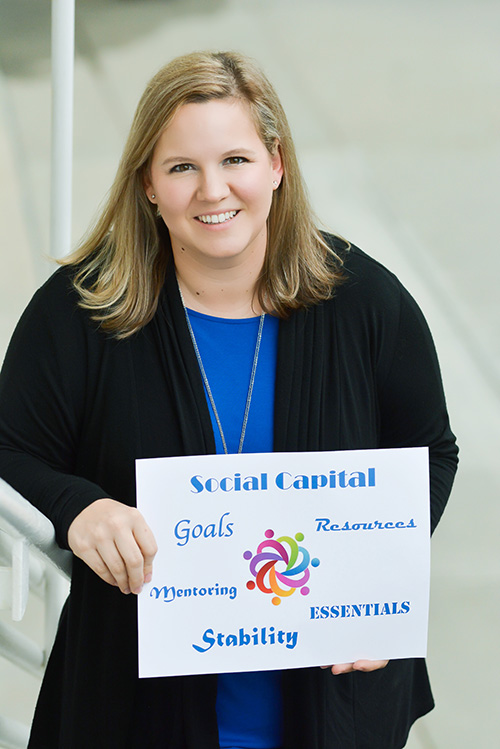 Families Forward Charlotte provides mentors who leverage social capital to guide low-income families in goal setting, accessing existing resources, and education to reach goals for self-sufficiency. By doing this, volunteers help families chart a course toward economic stability that has previously not been available.

What is the focus of your organization?

Easing the burden of poverty on children and their families by helping them on their path to stability. We provide mentors to local families living in poverty who help them goal set, budget, and connect with community resources they may not otherwise know about. We provide educational workshops that are accessible to the families, and limited financial support to help them break through barriers they face.

In 2014, I was listening to a program on NPR – not something I did frequently at that time – and the program was on a study conducted by Harvard, Stanford, and Berkley universities. This study was called the Equality of Opportunity Project, sometimes referred to as the Upward Mobility Study. The crux of this report was that the likelihood of a child who grew up in the bottom fifth of the income distribution, and managed to reach the top fifth for their age group, was at best only 8%. And of the cities that this study reviewed, Charlotte was dubbed the worst – ranked 50 of 50 in the country for lack of upward mobility. What this means is that if you are born into lower economic status in our great city, you will likely stay that way. I grew up in here in Charlotte and have always called Charlotte home. So, to hear that Charlotte was the worst city for upward mobility, was devastating. The city I was proud of for its diversity. The city that afforded me so many opportunities. This city was not what I thought it was. The truth was hidden from me. There are many reasons why Charlotte ranked so poorly, according to the study. Factors such as how segregated our city had become, both economically and racially, the need for more early childhood education options and resources, the lack of jobs that paid a living wage, a poor transportation system, and lack of affordable housing – all converged to stamp out the “American Dream” of growth. Some of you may be surprised by these statistics. How can this be, you may be thinking? Uptown is now booming; the real estate market is one of the most competitive in the country… how can the opportunity for upward mobility be so lacking? If you were to take a closer look, you would see that the housing being built is too expensive for most to live in. And the affordable housing that is available, comes with a plethora of drawbacks, such as poor school zones, high crime rates, and lack of public transportation. We are a banking city, and proud of it, but the lower income jobs in our city can’t even support a family. Fast forward a couple of years after I listened to the NPR program, to 2016, and my husband and I adopted a boy named Alex, and his family, for Christmas that year. I have never met Alex, but I will never hear that name and not think of him. His teachers told me that Alex was in cancer remission, but his family was struggling under the weight of medical bills and everyday expenses. His mom, a single parent, worked unfortunate hours with her job, and both of his older sisters were in school, attempting to pursue higher education. Alex often came home to a house full of people because they were currently bunked up with 3 other families – but his family wasn’t there. As part of the Christmas gifts for them that year, we loaded up bags and suitcases full of food and clothes, so if they found themselves having to move yet again, transporting their items would be a little easier. You would think I would have had a warm, fuzzy feeling when I unloaded all of the things for their family, but it was at this exact moment that I knew this simply was not enough. Sure, we were providing things at Christmas, but what happened when March, June, September came around. Would this family have what they needed? As naïve as it may sound, looking back, I couldn’t wrap my brain around why this family was still struggling. The mother was employed. The daughters were in community college and trying to better their situation. There are so many organizations here in Charlotte that offer assistance – is there still not enough help available OR Do they not know where to go for help? It was right then that the idea for Families Forward Charlotte was born. Knowing I would need reinforcements, I reached out to my friends, and Angelica and Dena signed on to help immediately! From there we hit the ground running.

Our work is so important because of the effect it can have on so many people. By mentoring parents/guardians we are having a lasting effect on the children in our program. It also trickles down and out to the teachers, schools and employers. Mentors telling someone in the crisis of poverty that they can do it is powerful.

What are you most excited for as it relates to the SEED20 process?

The opportunity to improve my networking skills and to tell the community about our impact.

What have you already learned from this process?

I have learned how important having a solid elevator speech is, and how networking with other nonprofits can lead to great opportunities and collaboration.

What do you hope to get out of SEED20?

We have intentionally been growing organically and not pursuing press/media, but we look forward to getting to tell a great audience that SVP has developed about our work to grow our volunteer base and partners.